One radical behaviourist is Clark Hull, who believed all human behaviour could be explained in terms of physics and maths- he was quoted as saying “a psychologist should not only understand mathematics, but think in mathematics”. Hull’s Mathematico-Deductive Theory was based on the factors affecting the gap between Stimulus and Response- known as “E”- and tried to transform these factors, such as  Inhibition, Fatigue and Motivation, into mathematical functions.

However, because Hull thought mathematically, he defined all of these variables so precisely that they weren’t able to be generalised to other situations- this made his work limited meaning it was not widespread in psychology. Hull’s later work was studying hypnosis, trying to prove the extreme claims of hypnotists. While he did manage to show that things such as hypnotic memory loss existed, he also showed that hypnosis isn’t a special state but a form of suggestion, and some people are more suggestible than others. 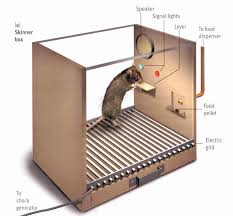 The main method of radical behaviourism is Operant Conditioning, and they also use a lot of animal experiments in the same way as behaviourism. Skinner was famous for the “Skinner box” (although he hated that term); a Skinner box was simply a box containing the animal, a thing that could be changed such as a lever, and a way of delivering a reward, such as a food tube. This invention may sound either fairly pointless or pretty cruel,but was actually neither; it was used in many different types of experiment, and was also operated by Skinner on  a strict “no punishment” policy.

While his animal inventions were well-regarded, he had less luck with inventions for children. His “air-crib”, a temperature and humidity-controlled sleeping area for babies, was designed to make childcare easier for his wife and encourage the baby to be more mobile and healthy. However,  it was misinterpreted as a cruel device to raise children in a box, and caused a lot of controversy. Despite this, Skinner is still regularly voted as the most influential psychologist of the 20th century, and radical behaviourism is still around now,  in things such as Applied Behavioural Analysis.

One thought on “Radical Behaviourism”