Of all the major social networks, Tumblr is the one I wanted to write about the most, because its a dramatic difference from the stoicism of Twitter and the envy-inducing highlight reel of Facebook. Just like most of its users, its young, bold, and easily misunderstood.

For the uninitiated, Tumblr is a microblogging site with a very “anything goes” attitude towards content: drawings, videos, music, gifs, longform text, links and pretty much anything else you can think of are all found there. Its major feature is reblogging, which is reposting someone else’s content onto your own feed and adding commentary, opinions, or a visual response- a cross between a Twitter retweet and a standard blog’s comment chain. Content is organised and collected using hashtags, which are essential for posts being discovered and read.

Part of Tumblr’s appeal is how it conveys the impression of a private, almost clandestine association. (In reality, there are over 100 million tumblr users, and it got bought by Yahoo! for over a billion dollars). Unlike most social networks, pseudonymity can prevail; a user can change their name as often as they want and hide all personal information, while the lacking search function works solely on tagged words, effectively making untagged content invisible except for to followers. Because of this, Tumblr can seem far more private than other social networks. Many posts are made seemingly without considering a potential audience- often off-the-cuff, reactionary, self-depreciatingly, or holding nothing back about mental health difficulties.

For many people, Tumblr is the place where they can let responses and opinions out that could not be expressed anywhere else. Often this means exploring identity and autonomy; for some people, that results discovering other communities with some of the same experiences as them, and learning that their confusing experiences are actually part of a mental health difficulty that can be treated and recovered from. It results in answers and knowledge.

For some people, it’s a space to talk honestly about the effects their difficulties have, and the subtle ways they are affected that may not be visible to others.

Many mental health blogs are run by people who have partially or fully recovered from their difficulties. These are often recovery-focused, encouraging people to talk to others and providing ideas for self-help, resources and crisis numbers. Others are victory-focused, encouraging self-compassion and celebrating progress with others: some use humour such as pop-culture-based gifs to illustrate people’s experiences and feelings during recovery in a light-hearted and relatable way. Others are communication-focused, spreading research results and information (often as infographics, comics, or videos) to educate people without mental health difficulties or explain how they can best help someone experiencing difficulties.

There is another face of mental health posts. Searching for a tag such as #depression or #anxiety reveals many, many posts about hiding fears, bottling up feelings, disguising self-injury. These posts, raw and unvarnished, can act as a catharsis, or as a reassurance to people that even their worst and most personally shameful feelings aren’t something unheard of. However, searching mental health tags reveals a lot of bloggers who impress that their difficulties and feelings are their identity, a permanent curse that cannot be escaped, as well as bloggers who continually encourage other readers to seek help while proclaiming themselves unworthy of it.

Along with people having the freedom and safety to express their experiences, their good and bad days and their feelings towards navigating the world while dealing with a burden that many don’t have or understand, also comes a minority who romanticise or glamorise mental health issues.

If you’re easily triggered or upset by mentions of depression, self-injury, eating disorders etc, please don’t read this next paragraph.

These posts vary, but normally carry a theme of tragic beauty; of someone meant for a place other than this world, or someone too vulnerable to withstand the world. They can be images; blurred hyperkinetic scenes of disconnection, people in melancholic monochrome, or paintings expressing the battle between society and the mind. They can be text; quotes about the futility of carrying on, the permanence of sadness, or the beauty of self-destruction. Or, they can be photographs; of dramatic weight loss, of collections of medications or alcohol that can be used to overdose upon, or of past or recent self-injury.

I’ll restate that, it is a minority.

But these posts are often worrying to read. From personal experience, these posts have inconsistent effects- if I am in a good place mentally, then reading them is a bad idea, as they sometimes make me feel very anxious or even induce dissociation. However, when I was already in a bad place, seeing the posts where people have given into their self-destructive impulses somehow made it easier for me not to act on mine. 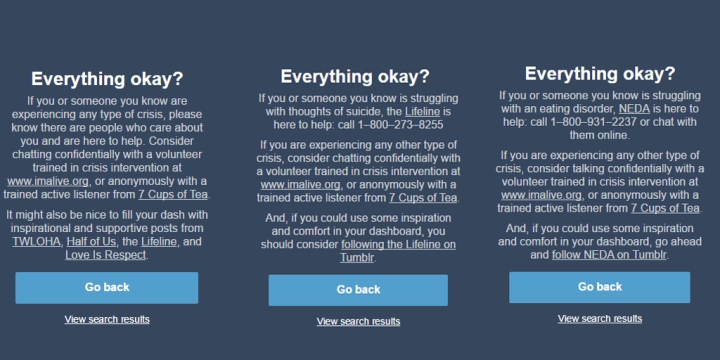 While there is this kind of content on Tumblr, the community and Tumblr staff act to protect as many people as they can. Pro-ana/ pro-ed blogs (those which present eating disorders as a lifestyle choice or a safe method of weight-loss) have already been dramatically reduced thanks to community members consistently investigating eating disorder tags and reporting other bloggers who post pro-ed content. The same is also happening for blogs that glorify self-injury.

Community members also actively provide and gather support for others; often, if someone posts a message that can be interpreted as suicidal, their followers will send messages of support urging them to contact resources and to keep going. Searching for mental-health-related tags brings up specific Are You OK? page with links to helplines, always-available online services, and organisation pages. A dedicated suicide prevention blog, TSWatch, also helps to identify and check up on posts reported to them, to make sure the poster is alright and direct them to local help.

Tumblr is hard to conduct data research on, even compared to other social networks. The features that let it be open and honest also mean it is harder to analyse produced posts, as there is very little way of telling who is old enough to give informed consent. This is a shame, as the amount of interesting, in-depth education and discussion of mental health issues in both individuals and society would be useful reading for academics and professionals. There truly isn’t anything else like it; both in terms of the depths of negativity that can be reached, and the depths of meaning, support and encouragement.